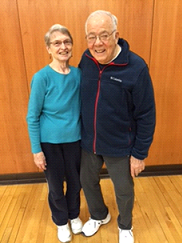 Tony and Lois have never been ones to sit around idly twiddling their thumbs.   Tony served as a pastor for more than 40 years, even during his “so-called retirement”, while he and Lois were also active volunteers for other non-profit agencies in Fond du Lac.   Together, they have led an active lifestyle with kids, grand kids and a committed exercise regimen.  Five years ago, when Tony learned he had Parkinsons’ Disease, he didn’t let it slow him down.  As Lois says, “Tony has always been a doer,” so he continued his exercising with Lois, took the prescribed medications by his physicians and went on with life as is.

Over the past five years, as the disease progressed and eventually Tony began using a walker, his determination never ceased.  “I never let it get me down.   I’m not going to let Parkinson’s slow me down or take over my life.”  So when he and Lois learned that the YMCA offered a Parkinson’s Exercise class, they joined the Y family together.

“I could tell I was losing muscle tone and that’s why I knew I needed this group.  I enjoy the class… it’s been good.  Lois is in Silver Sneakers class while I take my class.  I get on a bicycle until my class starts and when I’m done, I get on the machines again.  I don’t waste time.”    According to Lois, "Tony enjoys his classmates and the instructors watch him carefully.  He may not be moving as fast as some of the others, but he’s sticking with it!”

Martha, one of Tony’s instructors, says “He’s just so good in the group…he may struggle the most, but what’s so admirable is his determination and drive.  He’s always first to try anything, not to mention the support he is able to provide others in the group through his positive outlook on life.   Everyone else sees him and is inspired by him and benefits from his encouragement.”

Lois says, “We see the Y as a very positive place where we can do so many things.  Silver Sneakers, walking class, Parkinson’s Class.”  And it’s something they’re doing together.

Your story of connection, health and well-being, pursuing a passion, learning a new skill, or reaching a goal might inspire someone to reach out to the Y and change their life. Please share with us how much you love the Y and how we have made an impact on your life. Email your story to Kim Laws, stop by the Welcome Center desk or call 920.921.3330.

We'll keep you in the loop.

Receive notifications from the Fond du Lac Family YMCA via our mobile app.

Signing up for a YMCA program is easy and convenient.